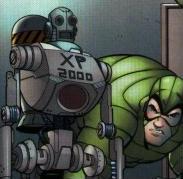 Hart, who had the idea and formed the group, produced Boomerang as his challenger. Wisen would later enlist the Rocket Racer, but we're here to talk about the second bout, where Masterson hired the Scorpion and Hills employed his latest creation, the robot XP-2000. Spider-Man was their ideal test-subject: he had drawing power (quite hated by the target audience) and no affiliation with any group of heroes or the authorities. And, of course, the Scorpion insisted.

XP's first line was classic. When the huge Masterson expressed his hatred toward robots upon sight of XP-2000, and asked where was he looking at, XP's response was:

Moving on to the story then: after the defeat of Boomerang, and due to the lack of appeal of a Spider-Man vs. Robot fight, Scorpion was added to the playing card as well. They double-teamed Spider-Man, and this was the birth of a beautiful friendship. Or, as Mac Gargan put it when he met XP-2000, "I've worked with worse." (No doubt he had Egghead in mind when he said that...)

XP's fighting skills were an instant sucess. By announcing his attacks and actually counting down to them, he ensured that Spidey could effectively evade his attacks or turn them against the Scorpion with little effort and no Spider-Sense needed.

But don't think XP's logical idiocy ended there - oh, no. It probably had no limits. Judge by yourself:

"No, come on, buddy, why would you want to crush me with your claws?"

"Subject: Spider-Man. Has no group affiliation. No arrangement with the law. You are the perfect guinea pig. The audience -- criminals, of course -- love to watch you. All in the hope that you'll be exterminated. You make great sport. Money in the bank."

"If you have further questions, feel free to contact Edwin --"

And that's about the time Scorpion saved the day, by destroying XP before he could reveal his boss.

But fear not. Spidey defeated the Scorpion, and restored the power to XP's head, and then took him to the Fantastic Four to make the robot operational again, so he could learn about his bosses. But even malfunctioning, our friend XP is resilient. Let's see...

Or, when looking at one of his parts in Spidey's hands,

After that, Reed kicks Spidey off the lab, and talks to XP himself. XP promptly falls in love with him. Watching everything via remote camera, Wisen gets jealous, while Hart freaks out, knowing that the only chance they have of stopping Spidey is the Rocket Racer.

Spidey leaves with XP for the gambling center after Reed triangulates XP's transmission signal and gives him a personality tweak. At the site, XP sets adrunken drifter on the right path with a pep talk. Meanwhile, the Rocket Racer arrives, following XP's homing beacon, and Spidey throws the fight, angering the gamblers - after all, who'd bet for the Rocket Racer? While Spidey is getting beaten, XP expresses his newfound concern ("Oh dear. If only I had my metal claws... ") And since Rocket isn't a bad guy per se, he gives Spidey Hart's address and leaves.

In the end, Spidey aprehends the 4 magnates, and XP testifies against them in front of the Supreme Court. Still without his claws, apparently...