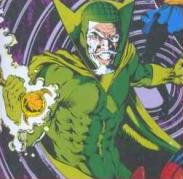 Xandu is a rival magician to Dr. Strange who wishes to be the Master of the Mystic Arts. As a young man, he accidentally releases a spell that strikes Melinda Morrison, his betrothed, and puts her into what he believes is a death- like coma. Searching for a cure, Xandu learns of the powerful Wand of Watoomb. He tracks down one half of the artifact and learns that the other half is in Dr. Strange's possession. Xandu hypnotizes two musclebound thugs, turning them into mindless fighting machines and sends them to Strange's Greenwich Village home where they steal the other half of the wand. But Spider-Man gets involved and eventually his powers in combination with those of Dr. Strange confuse Xandu into defeat. Dr. Strange drains the power from the Wand of Watoomb and then grants Xandu the "gift of total sleep" intending to cleanse his mind of evil ambition.

But Xandu actually sends his memory off into the mystic void before Strange can complete his spell. His amnesiac body wanders around as a derelict until his "questing mind" returns to him. His new plan is to steal the Crystal of Kadavus from Dr. Strange and use it to restore the power to the Wand of Watoomb. This time he hypnotizes Spider-Man into stealing it. The restored wand makes Xandu so strong that his hair turns black. He grows to about three times his height and starts calling himself Xandu the Unspeakable and Xandu the All-Powerful. He takes Spidey and Strange to his own created dimension where he toys with them but lets slip that he has ordained in this world that neither of his foes can use their powers against him. This gives Strange the idea of magically switching powers with Spidey, which allows them to wrest the wand from Xandu. Strange throws the wand into the void even as Xandu returns to his smaller, grayer self. To add insult to injury, Strange examines Melinda's preserved body and tells Xandu that she is not in a sleep resembling death but a death resembling sleep. Refusing to believe Melinda is dead, Xandu cracks up on the spot. Or so it seems. It's enough to convince Spider-Man and Dr. Strange to walk away without punishing him.

Xandu is not crazy at all but only faking to get the two heroes off his back. Left alone he searches the dimensions until he finds the Wand of Watoomb and then uses the wand to resurrect Melinda's body. But since Melinda is dead, her spirit is absent. No matter. Xandu uses the wand to capture the soul of the Scarlet Witch. He puts that soul into Melinda's body and keeps the Witch's body as a soulless slave. Somehow he expects the Witch in Melinda's body to love him as Melinda did. This doesn't happen. Xandu then drags Spider-Man into a trap, intending to get revenge but the whole mess is stopped by the spirit of Melinda, called from the death dimension by the reanimation of her body. She tries to convince Xandu to join her in eternity but he assumes she is out for revenge because he killed her and he attacks her instead. By the time the dust settles, Melinda is alive again in her own body, the Scarlet Witch is back in hers, and Xandu has been sucked into the death dimension to take Melinda's place.

Again, Xandu escapes his fate, this time by finding the Ruby of Domination while fleeing the demons of the death dimension. But his own powers are weak enough that the ruby only allows him to dominate one individual. He picks a member of the Defenders who sneaks up behind a preoccupied Dr. Strange and captures him. Xandu hangs Strange up on a mystical cross in the death dimension, guarded by demons. He takes the Eye of Agamotto, which allows him to magnify the power of the ruby and take over the minds of everyone on Earth. Before that happens, Strange mystically summons the Thing to come beat up the demons and free him. They journey back to New York where they find that Xandu has turned everyone in the city into a zombie. So far, however, he can only dominate one person at a time so that they will actively obey him. Unfortunately, he's still using that same member of the Defenders that he used before: the Incredible Hulk.

The Thing and the Hulk square off even as Xandu fights a mystical battle with Dr. Strange. With the tide turning against him, Xandu releases the Hulk from his influence and instead uses Wong, Strange's assistant, to whack his boss over the head. With Strange now trapped, Xandu tries to merge his soul with the spirit of the ruby, which will give him the power to enslave the whole universe. But Strange mystically summons the Thing again. The FF's strongman wrests himself from his fight with the Hulk and returns just as Xandu is merging with the ruby. The Thing punches the ruby and shatters it into pieces, breaking the spell. Dr. Strange banishes Xandu to an unnamed "nether dimension".

Melinda, meanwhile, has been having a hard time of it. She died twenty-five years before. Now she discovers the whole world has changed; everything she remembers either dead or older while she is not. Xandu summons death demons to pursue her. When Spidey and Strange get involved, Xandu takes over the web- slinger's body and snatches the Wand of Watoomb off of Doc's shelf. He sends Melinda back to the death dimension, which he has taken over. (He's even got himself a throne!) But Spider-Man has followed in his astral form. He takes over Xandu's body and returns to where Strange is fighting Xandu in Spidey's body. Strange casts a spell that switches the two misplaced astral forms back to their correct bodies. Xandu reveals that Melissa was never really restored to life but had "wakened to a state of death which merely resembled life" which is why she cannot find contentment. But Doc figures out that either Xandu or Melissa must leave or the whole dimension will collapse. In the end, the Wand of Watoomb is smashed, Melissa becomes the Queen of the death dimension and Xandu is brought back to Earth. There he falls into regret, sorrow and madness; much like the state he feigned once before. Strange promises to take care of him.

Which apparently means that he shoves Xandu into an asylum because we next find him in the New Bedlam Asylum for the Criminally Inclined. There Xandu manages to summon a reconstituted Wand of Watoomb and use it to take over the minds of the asylum employees. Sensing the return of the wand, Dr. Strange summons Spider-Man and the Scarlet Witch as his Secret Defenders. Captain America also gets involved. Xandu escapes to the death dimension. Since he cannot stay there with Melinda without the whole place coming apart, he plans to use the wand to merge the death dimension with Earth. As the dimensions grow closer, Melinda opposes Xandu. (It doesn't help matters that he calls her "Melissa" at one point.) At the suggestion of Captain America, Dr. Strange merges the death dimension demons into Melinda, which truly makes her the queen of the death dimension. Now stronger than Xandu, she thrusts him out of her reality back to New York where he is captured by the police. Though he let his ambition overwhelm him, Xandu still cares for Melinda and he sheds a tear at the loss of her love.