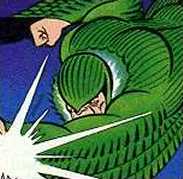 In Amazing Spider-Man #48, Blackie Drago adopted the mantle of the Vulture, as a result of tricking his cell-mate, Adrian Toomes, the original Vulture, into telling him there location of his recently re-built costume. Drago arranged for Toomes to have an accident, and then as Toomes lay on his death-bed, Drago promised to use the costume to defeat Spider-Man once and for all.

In fact, he had no such intention. His only goal was to make money, which he attempted to do upon his escape, by performing acts of air-piracy. His fame as New York's greatest villain attracted the attention of Kraven - and in a three way battle between Kraven, Vulture II, and Spider-Man, the eventual winner was our fearless web-head.

Subsequently, in Amazing Spider-Man #63, Blackie and Adrian Toomes (clearly recovered) joined forces to escape, each wearing the Vulture costume. Once they became free, however, Adrian publicly defeated the phony vulture, in order to humiliate him, and regain the recognition he deserved. A humbled Blackie was taken away by the police, vowing "I'm through!! I'll never put these wings on again!"

Drago was a super villain that, once put away, actually stayed away. A rare thing in these days of ninja ceremony resurrections, black magic, slight of hand and accelerated healing factors. He showed up in one panel in a 2005 comic, still in his jail cell. Spidey recognized him as he and the Black Cat were breaking into prison to free Norman Osborn.