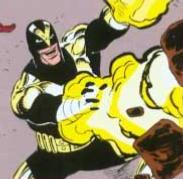 Spider-Man #32 (flash-back) - Behind the Scenes) - Several years ago, Dwight Faron was a chemist, with a wife and two kids. He was recruited by his friend, Vicary, to make Designer Drugs for Geoffrey Barnett. Frustrated with his low- paying job, Faron accepted the offer. However, when Barnett came under investigation, he had Vicary leave evidence which directed Spider-Man to Faron's laboratory. Spider-Man sent Faron to the police, who gathered evidence from the lab. Faron took the fall for Barnett's drug career, going to prison, while Barnett and Vicary walked away, scot free.

Spectacular Spider-Man #212 (flash-back))-Faron's wife left him while he was in prison, taking the children with her.

Behind the Scenes - After serving a five year term, Faron was released from prison. During his time in prison, one thing kept him going: vengeance on those who had sent him there and ruined his life. He found and captured Vicary, used his knowledge of pharmacology to design a serum to increase his physical powers, made a Spider-Man costume, and designed a costumed identity for himself: the Master of Vengeance. He forced Vicary to help him design the gloves to his costume to enable him to duplicate Spider-Man's wall-crawling ability.

Spider-Man #32-34 - Posing as Spider-Man, Faron began attacking criminals and brutally beating them, in some cases to death. This, as planned, attracted the attention of the real Spider-Man. Faron, as the MoV, located Barnett, and forced him to cooperate with his plan to destroy Spider-Man.

Faron, again in Spider-Man costume, drugged Vicary, and climbed the World Trade Center. The real Spider-Man heard of this before Faron had expected, and confronted him. Faron tossed Vicary to the ground and escaped while Spider-Man saved Vicary. Barnett and his men were hiding out and planning to ambush either Spider-Man or Faron. However, they were instead located by the Punisher, who killed them all. Faron, still in his Spider-Man costume, returned to Barnett's base, followed by the real Spider-Man. In one of those all-too-common misunderstandings, Spider-Man and the Punisher tripped each other up, allowing Faron to escape.

The Punisher tracked down Faron, now decked out as the MoV, and confronted him. However, Spider-Man was in one of his "save the criminal" modes, and continually messed up multiple opportunities to stop the MoV, nearly killing himself and the Punisher in the process. One of the Punisher's bullets shattered the controls on the MoV's gloves, causing them to overload and explode. The Punisher clocked Spider-Man from behind to stop Spider-Man from saving the MoV, but the MoV pulled himself out of the wreckage anyway. The MoV grabbed Spider-Man and was crushing him in a bear-hug, when Spider-Man noticed the Punisher targeting the MoV for a headshot. Spider-Man managed to push the MoV out of the way enough so that the bullet merely grazed his skull, knocking him out. Spider-Man unmasked the MoV, but had no idea who this guy was who wanted vengeance on him so badly.

Spectacular Spider-Man #212 - The MoV was sent to Ryan Mental Hospital where, under the care of Dr. Tarantino, he was drugged into a manageable state (which also apparently caused his hair to regrow!). However, Faron eventually managed to fake taking his medication, and after a week, he regained his full power and mental acuity. He faked hanging himself, causing the guards to come rushing into his cell. He then ambushed and killed them, and Tarantino as well.

Faron located his spare costume, stored in the Port Authority Bus Terminal and set out after Spider-Man again. However, as soon as he hit the streets, he saw things which reminded him of his past life with his family. He decided to take vengeance on everything, and went on a rampage. Spider-Man was drawn to the site of the destruction and engaged the MoV. After some struggle, Spider-Man ripped off the MoV's gloves and used them to blast the MoV. That, combined with a punch, dropped the MoV, and he was sent back to prison or another mental institution.

Behind the Scenes - Faron again escaped, under unknown circumstances

Amazing Spider-Man Super-Size Special#1/2 - Confused by the whole clone nonsense, the MoV attacked the Steel Spider, mistaking him for the newest identity of the Scarlet Spider and/or the new Spider-Man. The MoV assaulted the Steel Spider while he was doing publicity stunts at a street fair to raise money to help his girlfriend, Jane, pay to see a spinal specialist after her back had been injured. The MoV attempted to overturn a full Ferris Wheel, and the Steel Spider held it steady, but was beginning to lose ground. Jane rammed the MoV with her wheelchair. This knocked the MoV off balance enough for the Steel Spider to get the drop on him, trapping him in a steel mesh web net. The MoV was presumably sent back to prison or a mental hospital, never knowing he hadn't even fought the right guy.

I'll take any better explanations of the MoV's mental problems, as I'm no psychology-ologist.

The MoV was kind enough to not wear Spider-Man boot-socks over his metal shoes, so it was easy to distinguish him from the original.

Crazy old MoV thought he was in Ravencroft, instead of Ryan Mental Hospital.

I'm not going to even try to detail the multitude of characters who have impersonated Spider-Man. If someone comes up with a complete list, I'll do a Spider-Man imposters profile.

The Steel Spider is Ollie Osnick, who had designed a Dr. Octopus costume as part of a super-villian fan club, and then went on to become the Spider-Kid. I guess he grew out of that baby fat.

The names and histories of Faron's family are unknown. His wife divorced him after he was sent to prison, telling him how disappointed she was in him. She took the kids with her -- Spider-Man #32, Spectacular Spider-Man #212 (flash- back).

Vicary had had a future in electronics, but couldn't stay off the drugs. He ended up heavily in debt to the mob. Geoffrey Barnett offered him an out if he would find them a chemist. Vicary recruited his friend Dwight Faron for the job. When the police investigated the drug ring, Barnett had Vicary leave evidence that implicated Faron, who was sent to prison. Upon release from prison, Faron kidnapped Vicary and forced him to design the gloves for his costume to duplicate Spider-Man's wall-crawling abilities. Faron then overdosed him on drugs and tried to frame Spider-Man for his murder. Spider-Man saved Vicary, who was taken to a hospital and recovered. The Punisher located Vicary and forced him to tell him where Faron would be holed up. -- Spider-Man #32 (flash-back), #32, #33.

Geoffrey "Boss" Barnett was a mobster, seeking to climb to the top of his criminal circle. He employed Vicary and Faron, and set Faron up, making him take the fall when they were investigated by the police. After Faron's release, he planned to kill Barnett, but first forced him to help in his plan to kill Spider-Man. While Barnett and his men waited for the right time to kill Spider- Man or Faron, they were located and killed by the Punisher.-- Spider-Man #32.

Dr. Tarantino was the psychiatrist treating Faron at Ryan Mental Hospital. When Faron broke free, he cornered Tarantino, but was going to let him live until he begged for his life, showing a picture of his wife and kids. Angered because his own loss of his family, Faron killed Tarantino, but promised to make it quick -- Spectacular Spider-Man #212.