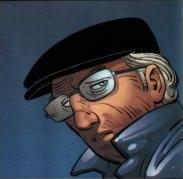 Leo Zelinsky has a tailor shop in what used to be a quiet neighbourhood. Eventually, the neighbourhood became not so quiet, and the number of clients dwindled. Zelinsky's break came when Benjamin Grimm, aka the Thing, came into his shop covered by the sports section of a newspaper, after a blast burned his clothes while he was fighting in the vicinity. Through word of mouth, Zelinsky's clientele engrossed, each client more surprising then the last. He served Genis Mar-Vell (Captain Marvel), Matt Murdock (Daredevil), Steve Rogers (Captain America), Thor and a few other Avengers, a bunch of the X-People, and villains, like Dr. Doom and Blob. To avoid confrontations between his clients, Zelinsky broke up his work days - on Mondays, Wednesdays and Saturdays, he sees heroes, and on Tuesdays and Thursdays, villains. Occasionally, he gets a few upstarts. While he prides himself of being a creative guy, The Ferret would not be a respected hero, that's for sure. Anyway, his business is prosperous.

Leo's father was a prisoner in a camp in Poland by the Nazi forces back during WWII, and he was a brave man who couldn't tolerate injustice. So was Leo, and so was his son, who became a cop in the US. The circumstances that lead his son to his death were not revealed, and it's unknown if both son and daughter-in-law died in the same incident, what we do know is that Leo became the guardian of his grandson Michael. And while his strict privacy policy didn't allow Leo Zelinsky to intrude in his costumers "professional" life, when he heard the hit man Killshot plan the murder of the DA Sam Whitehall, he couldn't sit by. This wasn't something that the client had done before, this was a murder that the client was planning. Nonetheless, Leo had to protect his grandson, because if word got out that he had betrayed a client's privacy, someone (even the client himself) might want to harm the Zelinskys. So Leo did the only thing he could - he tried to warn a hero who wasn't his client, so he couldn't be linked to the failure of Killshot's plan. Since this is a Spider-Man site, I'm sure you've guessed who that hero was.

Anyway, after strolling around for a few hours, he caught sight of Spidey over the rooftops, and called out to him. After telling him his story, Spidey (of course) agreed to help. Killshot was prevented from killing Whitehall, but he managed to distract Spider-Man and went directly to Zelinsky, figuring he had been set up. Zelinsky caught a bullet in the arm that was meant for his grandson, and Spidey arrived soon after and put Killshot out of commission. Zelinsky thanked Spider-Man for saving his life and his business by giving him a sketch for an upgraded uniform, telling him that he'll give him a nice discount if Spidey ever wants it. The costume was the same we've seen the future Spider-Man use in Amazing Spider-Man #500...