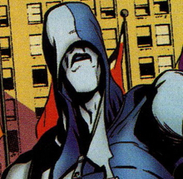 Keeping your friends close and your enemies closer had a whole new meaning for Spidey once The Extremist arrived on the scene, this villain desired to vindicate Spider-Man's true heroic nature by...killing him?

Tyler Smithson was a boy with remarkable gifts, or at least that is what his mother thought. Believing her son to be a mutant, she attempted to enroll him in Professor Xavier's School for Gifted Youngsters. Unfortunately for her and Tyler, Professor X denied their application citing that Tyler was not a mutant, rather, a standard homo sapien.

Years passed before Tyler made his public debut as The Extremist, and his first kill was the celebrity Mark Branden. Branden was a TV personality that had been recently spouting slander against all costumed heroes, including Spider-Man. Now calling himself The Extemist, Smithson hunted down and killed Branden, and, as he did so, he appeared to have the ability to become intangible as he walked through objects. Peter Parker, realizing there may be a connection between Branden's anti-Spider-Man stance and his death, sought to draw out The Extremist by starting an anti-Spider-Man blog. Peter's plan worked and The Extremist arrived at his apartment and nearly killed he and Michele Gonzales, his roomate.

Peter quickly changed into his Spider-Man costume and fought The Extemist out on the streets below his apartment. Spidey had a difficult time holding his own against the villain, and The Extremist eventually disappeared into thin air after dropping Michele and Flash Thompson (who had arrived to confront Peter about the anti-Spider-Man blog) to the their deaths. Spider-Man saved Michele and Flash, but soon became a target of J. Jonah Jameson (now the current NYC mayor) as he slammed the web-slinger for causing constant city-wide damage. While watching Jameson's press conference, The Extremist unveiled his true plot against Spider-Man. He believed the idea of Spider-Man the hero is far more important than the reality. So in order to preserve that idea, The Extremist must kill the web-slingers greatest enemy, Spider-Man himself! But first, The Extremist set his sights on the slanderous mayor.

When The Extremist arrived at City Hall to kill Jameson, Spider-Man intervened to thwart the villain's attempt. The Extremist initially had the upper hand, but Spidey was able to nullify his intangibility by using the same device he used to short out the Vulture's magnetic harness (yeah, that's right! From way back in Amazing Spider-Man #2 ). With the Extremist in 'solid' form, Spidey was able to pummel him and rescue Jameson. However, before the villain could be handed over to the authorities, machine guns (part of booby-trap set up to kill Spider-Man) unleashed a hail of bullets into The Extremist. Spidey called the medics, but it is uncertain if the villain survived.

The Extremist's current whereabouts are unknown.