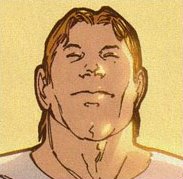 Many years ago in another solar system, Galactus had chosen to devour a planet inhabited by Skrulls. The chief scientist of the planet knew resistance was futile and so devised a plan to ensure the safety of his new born son, and in turn their species. The scientist imbued his son with powers far greater than any previously seen in their race, and after placing his son inside a specially designed craft set its course for a planet more primitive than their own. In doing this it was the scientist's intention that his son could conquer the planet once he had reached maturity by using his shape shifting abilities to disguise himself.

Eventually the infant's craft landed one night in Iowa, and a family out driving was witness to its arrival. Upon inspection of the craft it opened, and the couple was amazed to see a child inside. They considered it a gift from god and so decided to adopt him, unbeknown to them and the infant himself of his alien lineage. Named Ethan and raised on the farm, he had a strong moral upbringing. After soon realizing Ethan had incredible powers his parents taught him the importance of keeping them a secret. Eventually once Ethan had become a young man he felt he had a greater purpose in life and so left the farm

After moving to New York Ethan landed himself a reporter job at the Daily Bugle, and was soon being referred to as their 'New star reporter' by J. Jonah Jameson. Since losing his teaching job Peter Parker was at the Bugle in time to be introduced to Ethan and was then teamed up with him for a feature on Spider-man after landing himself a new full time position. During Peter's first day he and Ethan were taking a trip downtown when they spotted a man hanging from a window ledge. After changing to Spider-man the man fell from the window but was caught in the air by a hero wearing a green cape. Inside the building Spider-man tangled with the Absorbing man, before the green cape reappeared and in one punch sent Creel halfway across Manhattan. Spider-man and this new would be hero had a rendezvous atop a building and revealed how they knew each other as partners from the bugle working on the new Spider-man feature. Later that day Ethan revealed how he wanted to use his powers for the good of mankind and reluctantly, Peter agreed to be Ethan's superhero mentor.

Keen to discover the full extent of Ethan's powers and their origins, Spider-man took his new friend to the Baxter building and to the attention of Reed Richards. Following some tests Ethan, now calling himself 'Virtue' proved to be in the same strength bracket as the Thing, able to see in any light spectrum and able to match the Human Torch's speed and Manoeuvrability while airborne. Later that day Ethan's face was captured and broadcast on TV. Upon returning to the Bugle everyone knew who he was and wanted his story. Peter got a call from Mister Fantastic and he explained he had tracked the craft that brought Ethan to earth and with it the details of his alien history.

In Iowa at the site of Ethan's spacecraft the Fantastic Four were quizzing Ethan's dad when Ethan arrived. Soon the craft seemed to talk to Ethan in his native tongue after which he attacked the Fantastic Four before his dad defused the situation. Back in NY, Ethan was now seemingly operating on a new set of directives. Outside the Baxter building he demanded to see Reed Richards again. After smashing through the exterior of the structure, the Avengers led by Spider-man showed up and a quick brawl ensued.

After seeing these events on TV amusingly, Aunt May and Edwin Jarvis showed up and managed to talk Ethan down by convincing him of the good he could do in the world by healing the needy. Following this advice Ethan moved overseas to help the less fortunate.