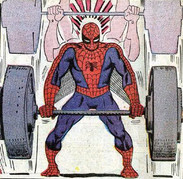 Superior strength is a boring but somewhat necessary requirement for most superheroes. There are plenty of examples of physically weak villains, but bulging muscles are pretty much mandatory for superheroes both male and female.

Once-scrawny teenager Peter Parker is no exception. When he acquires his Spider-Powers, it comes with the obligatory "proportional strength of a spider". Without that increased strength, he couldn't event swing across town, let alone go toe-to-toe with the wide range of threats from muggers to cosmic warlords that populate his exciting career.

In his early days, as a teenager, Spider-Man's official bench-press strength was 10 tons. But the following years have seen him demonstrate levels far above that mark. A more realistic assessment for modern Spider-Man's strength would have him capable of lifting 40 tons – or perhaps more when under extreme stress. That brings him close to She-Hulk (75 tons) and Ben "Thing" Grimm (100 tons). They all pale in comparison to The Hulk whose strength appears to be effectively limitless, reaching cosmic levels at times.

Spider-Man's strength appears in almost every issue, and its various forms and uses are too many to list in detail. But here's a few classic examples that are often quoted when attempting to determine the limits of his physical ability.

From Amazing Spider-Man #33 the famous scene where Spider-Man finds inspiration to throw free many tens of tons of machinery to save himself from drowning in the lair of the Master Planner. This was revisited again many years later (in stone) in Amazing Spider-Man #365. See also Spectacular Spider-Man #168 as he breaks free of a stone-capped well.

Then in Spider-Man (Vol. 1) #98, Peter holds up "part of" the Daily Bugle (one support-beam's worth) and manages to stand up under the weight.