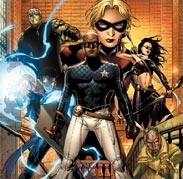 In the year 3016, technology ruled the alternate world known as Other- Earth. 16-year-old robotics student Nathaniel Richards was rescued from a fatal attack by his future self, the time-traveler known as Kang the Conqueror. Kang gave Nathaniel a suit of psychokinetic armor that responded to his thoughts and gave him a glimpse of his future as Kang. Horrified by Kang's deeds, Nathaniel rejected Kang's help and used the armor to escape to modern day Earth to enlist the help of the Avengers to defeat Kang.

Unfortunately, not too long ago after the Scarlet Witch's breakdown, the Avengers had disbanded and the mansion was in ruins when Nathaniel, now calling himself Iron Lad, found it. A glitch in his armor prevented him from traveling any further back in time and failed attempts to contact individual Avengers prompted him to take his own actions. He broke into Star Industries where he uploaded the CPU of the destroyed Vision, where he discovered a failsafe program designed to locate super-powered youths with some significance to the Avengers or Avengers history to become the next generation of heroes if needed.

Three of these young Avengers were located in the New York area: Eli Bradley, grandson of Isaiah Bradley who was the sole surviving guinea pig of the early stages of the Super-Soldier program to follow after the first Captain America (Steve Rogers); Billy Kaplan, a boy mage with the ability to project waves of energy; and Teddy Altman, able to turn into a massive green powerhouse with a healing factor. Becoming Patriot, Asgardian and Hulkling respectively, Iron Lad led the quartet on several missions to train them for battle with Kang.

Upon learning about the team, Captain America and Iron Man set out to stop them before they got hurt. Meanwhile, the team was beginning to grow as Cassie Lang, daughter of fallen avenger Scott Lang, aka Ant-Man, decided to try and continue with her father's heroic legacy. She had been stealing Pym particles her father utilized for years in the hopes of gaining powers, and eventually discovered that she eventually could increase her own size. Her desire to join the Young Avengers was shared by a woman who assisted them in stopping gunmen at her sister's wedding, Kate Bishop who also sought to join them with her weaponry and athletic skills.

By the time they found the team at Avengers Mansion, they were already being confronted by Cap and Iron Man, as well as Jessica Jones. That's when Kang chose to come for Iron Lad. A battle ensued, and Iron Lad had used Kate's sword to kill Kang. However, ramifications befell the time stream, including the Avengers being dead. The only way to restore time was to go back in time and reluctantly become Kang. His armor, which he removed to prevent Kang from tracking him, had become a new body for the Vision through the CPU Iron Lad had downloaded earlier.

The older heroes forbade the younger ones from ever putting on their costumes again, or else they would do everything in their power to stop them. The team reluctantly agreed, but soon found themselves changing their minds quickly. Each one had their own reasons for becoming Young Avengers in the first place, and even with Iron Lad gone they had a need to be heroes. Kate supplied them with a new headquarters, an abandoned warehouse belonging to her family, and with new costumes so that they could keep their promise and never wear their old costumes again. Thus, the Young Avengers reassembled.

The events of Civil War had plagued the team. Refusing to register, the Young Avengers were captured by Capekillers until Captain America and the Falcon Rescued them. They joined the Secret Avengers and fought against registration proudly. In a battle with the Registration Strikeforce, Goliath was killed by a clone of Thor and the Secret Avengers were forced to retreat, leaving Wiccan behind to be captured. Stature took Goliath's death hard and defected to the pro-side. The others remained with Cap's team, excluding Hulkling who had been embedded in the pro-side disguised as Hank Pym.