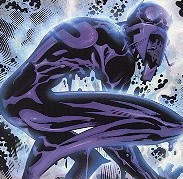 A few years ago, in the village of Malpura, Bangladesh, in a normal day as so many others, a pall of thick, black fog came down, coating people in a dark sticky substance, that seared the eyes and lungs and clung to the skin like burning oil. 4,000 died, and the survivors were contaminated for life with some kind of virus. They accused AGK Incorporated of being responsible for a chemical leak, but AGK tried to cover it up. They denied the accusations, until a protest at the United Nations forced AGK to pay 9 million in compensation.

Present day. Tara, supposedly a Buddhist Goddess, sought vengeance for the villagers. It is possible that Tara is just a mutant, who was present in Malpura at the time of the poisoning, seeing she is infected with the virus herself. She stole the Star of Persia, a jewel worth 50 million from the vaults of AGK. Then, she lead Spider-Man to AGK's trail, and he dug up info on the Malpura incident. Finally, she set up clues for Spidey to follow her, and arranged a meeting with AGK CEO Kirkland and Security Chief (?) Corman.

In that meeting, she asked for another 50 million for the victims; Corman pulled a water gun filled with a watered down version of the virus, and said "no". The weaker version of the virus would still be lethal to Tara, because she had already been exposed. Corman and Kirkland have an argument concerning the first's methods. Corman reminds Kirkland that he has security videos that proof Kirkland is as deep in it as himself, and tells the CEO to shut up and let him do his job. He reveals that the C.I.A. paid them 100 million dollars for an undetectable intelligent metal nano-virus to be released into a non-threatening environment. AGK tested it on Malpura's villagers.

Spidey shows up in the nick of time, when Corman was about to shoot Tara. A drop of the watered down virus burns Spidey's arm. The virus links Peter and Tara's mind, along with the minds of everyone else who died in the village. Peter's spider-sense attunes to the consciousness of those who designed the virus, and it is revealed that the virus is an intelligent metal entity with a single mind designed to enhance latent human/mutant tendencies for application in military conflicts.

Corman flees into the research lab in the ensuing fight, and plunges against the virus' containers after Tara dodges his punch. The virus takes over him, and Corman begs for help. He's being burned, eaten alive. The entity that emerges calls itself The Virus, and it says to Spidey that they are a part of each other. It then burns through the floor and escapes, not to be seen again until this date.