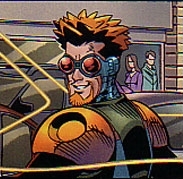 Spider-man first encountered bad guy Tracer while he was holding up a bank downtown. Inside the bank Tracer boasted of how he had caused a massive road block by taking control of the traffic lights thus stopping the police reaching him in time, though he hadn't counted on Spider-Man showing. Upon stepping outside to meet Spider-Man he fired two bullets at the web slinger that tracked their target like homing missiles. After clocking up a few blocks trying to escape the bullets Spider-Man decided to stand his ground and attempt to catch them both his hands. He caught one but the other pierced his shoulder.

Soon Spider-Man caught up with Tracer, who now perched atop a flying device which he claimed contained a bomb he would detonate unless the city paid him off. Just as it looked like Spider-Man was getting the situation under control Iron Man showed up to help out before turning the attack towards Spider-Man. Unbeknown to the spectators below Tracer was actually overriding Starks control of the armour and using it as a weapon of his own. Iron Man soon managed to regain control and with Spider-Man's help deactivated the bomb as Tracer's airborne ride crashed to the ground and he escaped once more.

The following night Tracer infiltrated Avengers HQ with an aim to kill Spider-Man. Using his powers to cause chaos in the city, he hoped to slow any possible Avengers showing at Stark tower. Inside Tracer spoke with Aunt May. Claiming to be a reserve Avenger named 'Tommy' assigned to CCTV for the night, he explained that he was a 'machine god' created by the artificial intelligence of other machines. Boasting that the longer he operates the greater his control over mechanical devices.

Spider-Man soon showed and pounced on Tracer- quickly getting the better of him in a hand to hand combat situation. During the fight Tracer analysed Spider-Man's DNA concluding that he was too weak to pose a threat. (This was taking place while Peter was being hunted by a resurrected Morlun. The disease and Morlun both managed to kill Pete.) Tracer then vowed to instruct his machine minions to step down and restore order in the city for the time being. While choking him with some web lines Tracers flesh liquefied and melted from his body, revealing a metallic core.