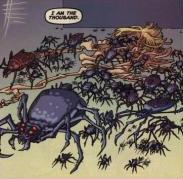 It should have been him. That's what consumes Carl King ever since childhood. It should have been him. King reminisces as he watches Spider-Man defeat the Rhino. He reminisces about the times when he bullied Peter Parker, from kindergarden to high school. About when he witnessed the spider bite and followed Peter, discovering his secret. About his jealousness, when he doubled back and ate the spider. And about the unforseen results that move had, which consumed his body from within...

Finally, all this time passed, and King is ready to make his move. His jealousy became hatred long ago. He jumped bodies again and again, getting stronger each time. He grew in numbers. He became a thousand spiders, The Thousand. Powerful enough to face Spider-Man, to defeat him, and take his body. To finally have what he always wanted. That night, King broke into the Bugle's office, and took the body of Jessica Patton, who worked there. Using her as a trojan horse, he paid a visit to Peter Parker, and catching him by surprise, he managed to paralyze him with a venomous bite. When he was just about to take Peter's body, the super-intendent, Mr. Ambrose, came to check on the noise, and became King's last victim. King took Ambrose's body, and then delighted himself in revealing all the story to Peter. Until the venom wore off. Peter was ready now. The fight was tougher, and King ended up being electrocuted in a show of fireworks as lots of flaming spiders shot out of Ambrose's body. But one spider survived. Enough to carry his consciousness, enough to start all over again, to bide his time and grow strong. But ironically, enough to fit under a single shoe, as King was squashed the foot of by a passer-by as he cluelessly gloated about his inevitable comeback.