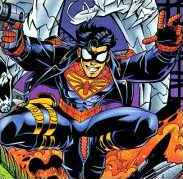 Spider-Boy [Spider-Man / Superboy] was created in Project Cadmus [DC] and was then adopted by his "uncle" General Ross [None / General Ross, Uncle Ben] (Spider-Boy calls him Uncle Gen). Spider-Boy then assumed the name Pete Ross [Peter Ross / Peter Parker, General Ross]. His immediate fame caused him to get an agent, Rex Leech [DC]. He befriended the Challengers of the Fantastic [Challengers of the Unknown / Fantastic Four] and many other heroes. As one would guess, he made many enemies including Bizzarnage [Bizzaro / Carnage], Scavulture [Scavenger / Vulture] and several more. He got a job at the Daily Bugle [Marvel] which is a tabloid in this universe.