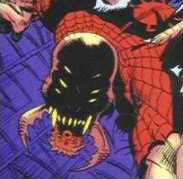 Brian Kornfield grew up off Broadway in New York, raised by his mother, his father having been killed at an unknown time period. He had a very active imagination and idolized all super-heroes, even writing letters to as many of them as he could. His mother was brutally assaulted and mugged on the Streets on New York. Brian became obsessed with becoming a super-hero, so he could find and take down her muggers.

Brian was met by the Dwarf, an agent of the demon Chthon, who offered him the power to be like his idol Spider-Man, via a page of the magical tome, the Darkhold. Brian accepted the offer and was transformed into Spider-X. His obsessive desire for vengeance was twisted even further by the black magic of the Darkhold, and Brian saw himself as the ultimate arbitrator of justice, willing to mete out punishment that no one else would.

Spider-X first brutally slew the mugger who had attacked his mother. He then captured and planned to slay some other criminals, which brought him into conflict with the Ghost Rider and John Blaze when they crashed into a web Spider-X had spun across entire street. Their conflict ended inconclusively when Spider-X fled from the Ghost Rider's penance stare. His eight eyes may have somehow diluted the stare's force, allowing him to break its hold.

Another group of occult investigators/warriors, the Nightstalkers, came to New York and investigated a previous letter from Kornfield, which claimed there was an occult basis to the rise in crime in New York City. Spider-X attacked the three when they questioned his mother. His struggles escalated, bringing in some of the Darkhold Redeemers, summoned by the energy released by the use of a Darkhold page, as well as Morbius, and even Spider-Man himself.

Still seeking to punish criminals, Spider-X continued to fight off the occult warriors, and traveled to the 14th Street power station, where the mutant criminal Paralyzer was using the electrical energy to recreate the electrical monster Zzzax. Spider-X attacked Zzzax, and the group of heroes fighting him poured their own powers into the conflict, which caused an energy overload, apparently killing both Spider-X and dissipating Zzzax.

Note: All who encountered Spider-X initially believed that he was actually Spider-Man, mutated by the Darkhold, until Mrs. Kornfield learned the truth and explained it to them.

A window is always open for the return of a being affected by magic (especially black magic), if anyone ever had the interest (not likely).