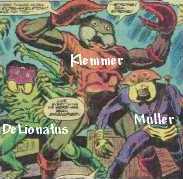 The members of the Spider-Squad were a "master criminal," combining their talents until Spider-Man put a stop to their activities. They each sought vengeance on Spider-Man.

They were hired by Anton DeLionatus, the producer for Delazny Studio's movie, "Spawn of the Spider." The movie was behind schedule and over-budget, when the stunt-man for the lead character, the Man-Spider, nearly fell to his death. The director of the film, Barney Muller, fired the Special Effects director, Klemmer, for designing "faulty equipment." Klemmer told Muller that he would regret this.

To replace the stuntman, Muller subsequently hired Spider-Man, who had been nearby to watch his girlfriend, Mary Jane who was playing the part of an extra in the movie. Delionatus saw the picture as a losing business venture, and hired the group of above-mentioned master criminals to become the Spider-Squad. He outfitted them with exo-skeletons designed by Klemmer, deliberately framing Klemmer in the process.

Spider-Man followed them to their "base", an old silo on an abandoned farm in Yonkers. The Squad set at trap for Spider-Man, and he was caught in a tangle of sticky web while trying to sneak up on them. They had him at a disadvantage until he eventually broke free from the web, and tangled them up in it. Spider-Man made short work of the entangled Squad, and then found the unconscious form of Klemmer. DeLionatus, who was present a short distance from the silo, detonated some pre-set explosive charges, planning to kill all involved to prevent him from being connected with their activities, and seal the blame on Klemmer. Spider-Man, however, was warned of the imminent explosion by his spider-sense, and managed to get himself, the Squad, and Klemmer out in time. He then caught DeLionatus and presumably sent him and the Squad to prison.

Note: The individual members, who are referred to only by the skill (strongman, acrobat, and tumbler) should not be confused for the super-villains by those names: