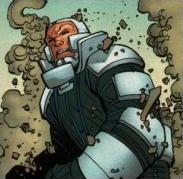 DeepCore Tech was developing a mining suit that allowed a man to go deep underground and core out the the ground as he goes, using a combination of high and low frequency vibrations that can pulverize everything in its path. The prototype was stolen. The thief was not very bright. Unfortunately, the suit was highly resistant, so the guy was hard to stop. It was a couple of hours after The Shaker tried to rob a bank until Spider-Man managed to throw him into a swimming pool. In there, the Shaker used the costume's powers... and the vibrations created a mini-Tsunami inside the pool, defeating the villain.