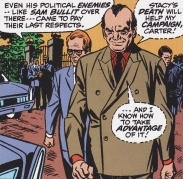 After police Captain George Stacy was killed in a battle between Doctor Octopus and Spider-Man, Sam Bullit took advantage of Gwen Stacy's grief. Gwen believed it was Spider-Man's fault that her father was dead and she swore that he would be brought to justice. She offered to volunteer for Sam Bullit's campaign to become New York's new District Attorney in hopes that his tough stance on crime would bring in Spider-Man. "Your father was a fine man, Gwendolyn--the finest. But he was too soft--too charitable--and that was his undoing!"

Bullit immediately calls J. Jonah Jameson and tells him that he plans to run on an anti-Spider-Man platform. Jameson immediately agrees to endorse Bullit, which upsets Robbie Robertson. "That fledgling fascist is still living in the 1930's!" Despite Robbie's concern, Johan begins hailing Bullit as the man to save New York. Walking home one night, Peter Parker gets jumped by some goons of Sam Bullit, who is looking for information on Spider-Man. He says that he hardly knows anything about him, so the two goons beat him up.

Peter pretends to be too hurt to fight back and goes after the two as Spider- Man. He slaps them around and tells them to give the message to their boss. He swings through the window feeling good, but that feeling doesn't last, as he finds Gwen and Sam Bullit waiting for him in his apartment. They knew that Peter had some connection to Spider-Man and came to talk to him. In desperation to thrown them off connecting Peter Parker and Spider-Man any further, Spidey grabbed Gwen and pretended to kidnap her. Bullit couldn't have been happier to see it. He was sure that Spider-Man had just given him the election.

As Spidey swung away with Gwen they were spotted by Bobby Drake, aka Ice Man. He quickly got his date a taxi and went after Spidey and the struggling Gwen. Spider-Man takes Gwen to a roof top to tell her what he thinks of her loser boyfriend, but gets interrupted by Ice Man. He leaves Gwen with Drake, just as the police arrive with Bullit. Irritated that Ice Man is there to steal his thunder, he quickly makes it look like the X-Man works for him.

As Bullit is practically moving into the D.A.'s office, Jonah calls him and tells him that Parker told him how he got beat up by Sam's goons. Robbie then lets Bullit know that he has been doing research on him, and learned how he is a supporter of various hate groups and knows about his plans for minorities. Bullit leaves, but his thugs stay behind and wait for Robbie. They force him to come with them, and Spider-Man tries to follow them. Unfortunately, he gets ambushed by Ice Man.

Spidey manages to web Drake up and goes back to chasing Robbie and his kidnappers. Luckily, they were slowed down by traffic. Spidey finds them with a tied up Robbie in a warehouse, and is aided by Ice Man, who over hears their plans for Robertson. They easily thwart the murder attempt. After alerting the police, they find Bullit giving a speech and let him know Robertson is still alive. In a moment of panic, Bullit screams that Robbie cant be alive. His boys never fail him. That's all the police need to arrest him.