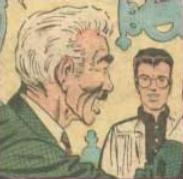 Professor Cobbwell was a "brilliant man", a lecturer at a science institute and "the most famous electronics expert in town". Looking for a bargain to have new tubes put in his small radio (though, being an electronics expert, I don't know why he didn't just do it himself), Cobbwell heard about the "ridiculously cheap" prices at the Tinkerer Repair Shop. Sometime after leaving his radio at the shop, Cobbwell visited his friend Mr. Warren, science teacher at Midtown High School, and asked him to recommend a student to help with an "urgent experiment" over the weekend. Warren recommended Peter Parker.

Cobbwell asked Peter to go to the Tinkerer's shop and pick up his radio before coming to his lab to work. Peter was surprised that the Tinkerer only charged ten cents to replace the radio tubes but Cobbwell didn't think much of it. While helping the Professor with his experiment (involving chemicals and beakers even though Cobbwell was an electronics expert), Peter's spider-sense reacted to some strange electrical impulses that he also noticed at the Tinkerer's shop. When Cobbwell left the lab to lecture at the institute, Peter opened the back of the radio and noticed equipment that shouldn't be there. As Spider-Man, Peter infiltrated the Tinkerer's shop only to stumble upon a scheme to spy on "important Earthlings" by an apparent group of aliens using "electronic spy devices hidden in radios". After Spider-Man foiled their plans, the "aliens" appeared to escape earth in a space ship.

Back at the lab, Peter opened the back of the radio and found it to now be perfectly normal. Cobbwell entered and excitedly told Peter that he spotted a space ship "fading into the atmosphere" as he was driving back from the institute in his car. But believing that people "will think I'm a typical absent-minded professor", Cobbwell decided he must have imagined it and got back to work with Peter on his experiment. No word on how the urgent experiments turned out but with Peter Parker as his assistant, Professor Cobbwell undoubtedly did very well.