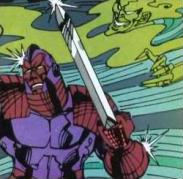 Malcolm and Leo Knight were two young orphans, in Liverpool, 20 years before Spectacular #166. They were adopted by an old drunk named Edgar Fogg. Edgar already had two children: Thomas and Evelyn. Leo was a nice kid, but due to Thomas' influence, he and Malcolm became delinquents. Malcolm only listened to Evelyn Fogg, the big sister, but Thomas' hold on him was stronger, as he was his only friend (I wonder why Leo wasn't...). Malcolm and Thomas kept causing trouble again and again.

Bad boys grew into evil men, and with psychopath Thomas choosing their jobs, they eventually became assassins for a mob boss in Liverpool. Eventually, 5 years before Spectacular #166, they were given just another assignment: killing Professor Henry Lewis, a Physicist whose love for horse races made him ask for loans he couldn't repay. Lewis was a genius, whose work wasn't fully assimilated yet, not even by Reed Richards or Stephen Hawking. Anyway, it was something called "wave-particle". He was conducting an experiment when the duo came in. Fogg shot him, the device went nuts and zapped them. The lab exploded.

Knight and Fogg were reduced to their quantum particles and rebuilt, this time as what they imagined themselves, Fogg a ghost of mist, and Knight a medieval knight in armor. Of course, they became just what their names implied. This is one of the most sillier writer gimmicks.

Knight and Fogg were now worse than they had ever been, as every killer is when/if he gets super-powers. They probably worked they way up to being hitmen for a London mob boss, because when the Kingpin contacts his Londinium counterpart asking for someone to kill the Arranger, his lieutenant who had failed a lot in a relatively short amount of time, it's them that are sent.

The Arranger had asked for Spider-Man's protection, knowing that he was going to get killed, but it was useless; Spidey rejected it and only realised he was serious after finding the Arranger's body and his killers. Spidey tracked down Knight and Fogg back to Liverpool, where he had a very unsuccessful second round, and got thrown into the Mersey River, bumping his head on a barge on his way down.

Leo Knight pulled him out of the water, and removed his costume. When Spidey regained consciousness, he realised he was amnesiac. Leo held back the truth from him, trying to protect his own brother. But when it became obvious that the only way that Evelyn would ever look at him was if Malcolm was paying for his crimes, Leo told Peter who he was, and returned his costume. At that moment, Fogg, who had found out that Spidey was still alive, crashed through Leo's window and tried to kill him. Spidey, thrown outside, had to deal with Knight. When he got the upper hand, Fogg came out and Spidey had to flee. That's when Knight looked through the window and saw the motionless body of his brother. That's when he showed Evelyn, his love, exactly who he was. And he went after Spider-Man.

Unable to stop Fogg, Spidey had to rip off a high voltage wire to stun him. Getting the upper hand was once again a short experience, because Knight arrived thirsty for vengeance. When he realised Fogg, not Spidey, had killed Leo, he attacked his former partner, not caring about his brother's betrayal. Then Spidey used the wire to knock them both out. After that, Evelyn and Edgar arrived, carrying a battered but alive Leo on their shoulders. Apparently Fogg was not a very competent killer.

Both Knight and Fogg are presumably serving time, if there's any prison that can hold Fogg and allow oxygen to enter at the same time.