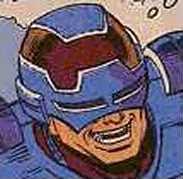 Sturdevant E. "Bob" Robbins, is Hypertron. His PR agency was falling apart, so he tried to get Spiderman as a client. Coincidentally, when he proposed it to Spidey he was catching a bank robber wearing a special suit. Bob knocked him out and took the suit for himself. He welded a grid in it so the heat dispersal wouldn't be blocked and then started thinking codenames to gain fame (Bobtron 4000, Captain Bob, etc.). But the robber's name was Hypertron and that's what he settle with, eventually.

Meanwhile, two of the developers of the suit paid the bail of the robber and third scientist. They are three nerds and former AIM scientists who just spent the last of their money making the suit. They trace the suit and start fighting Bob. Spidey gets in the way and when Bob's Volt Rays aren't enough to stop the heavily armed trio, he asks the suit's Help to get a good weapon. It suggests the Negative Vortex.

He activates it and the trio goes "Oh Boy". it is gonna wipe half the city out. With Spidey's intervention, it doesn't do anything, the three go under arrest, and Bob gives the suit back to him.

But he is smart enough to keep a copy of the suits' diagrams to himself.