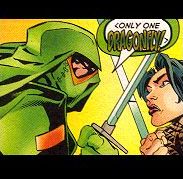 Karsano was a man of honor, and a man of passion. He was engaged to Meiko Yin, cousin to the Bugle's Angela Yin. They studied martial arts together, and they both became top-notch. They joined a branch of The Hand called the True Believers and Madam Qwa, their leader, gave him the rank of Dragonfly, which means perfection. To test his loyalty, Qwa ordered him to kill Meiko. According to their code of honor, he had only three tries.

We didn't see the first. The second is foiled by Spider-Man's interference. The third too, and Spidey breaks his 500-year old Ceremonial family sword. After his dishonorable defeat, he kills himself by self-immolation. Then Meiko goes to see Madam Qwa, and is assigned the position of Dragonfly. Since Karsano always carried around a pack of ninja to try and kill Meiko, I'm guessing that either their code of honor was very flawed, or that she was already a challenger to his position, and as such had to deal with him and his men. Of course, Meiko was dishonored by Spider-Man's interference too, so she'll have to redeem herself eventually.