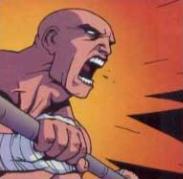 Crusher Hogan is the best wrestler for his organization but business isn't looking so good. Both Bobby, his boss, and Marie, his wife, tell him he should take a job with Global Wrestling but Crusher is too loyal to change.

So, Crusher comes up with a way to bring back the audiences and save the failing organization. He turns himself into a bad guy and offers a reward to anyone who can last three minutes in the ring with him. According to Crusher, the prize is ten thousand dollars and the amount is borrowed from Hammerhead and his mob. But in reality, the prize is $100 and the mob doesn't seem to have anything to do with it. Whatever the circumstances, Crusher is doing fine until confronted by a young man he sarcastically refers to as "a little Masked Marvel". The young man is Peter Parker in his first formal use of his spider-powers. Peter picks Crusher up and carries him up a pole until Crusher cries out, "you win"!

Ruined by the encounter (and with Bobby's wrestling organization apparently going bust as well), Crusher takes a job as a janitor at a local gym where he regales people like up-and-coming boxer Bobby Chance with tall tales about training Spider-Man, creating the web-shooters and providing his costume. The gym is run by Madame Fang and Manslaughter Marsdale, two sinister types who don't take kindly to the news that Bobby plans to sign a contract with someone else. Crusher overhears Manslaughter and Fang planning to put Bobby out of commission and he joins the fight on Bobby's side. Fortunately, Spider-Man happens to be passing by and, hearing gunshots, gets into the fight as well. After defeating Manslaughter, Spidey goes along with Crusher's stories, making the washed-up wrestler a hero in all of the gymrats eyes.