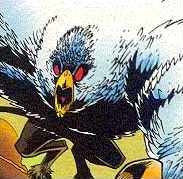 Long ago (centuries? milennia?), the ancestors of the Savage Land tribe, the Fall People, attempted to escape the Savage Land. In the frozen Antarctic outside the jungle world, they encountered the mighty Chtylok, who drove them back into the jungle...in pieces. The tribesmen believed that this was a warning from their guardian that they must stay in their valley. The Fall People worshipped Chtylok, and began leaving it offerings (a fatted ram, that sort of thing) each new moon. They believed that one day a terrible disaster would threaten to wash over their valley, but then the great Chtylok would rise out of the earth to save them from that which would destroy them.

In the modern era, damage to the ozone layer above the Savage Land had begun to cause the glaciers around the jungle world to melt, threatening to flood the entire region. Water trickled down into the subterranean caverns, awakening Chtylok from its milennia long sleep. It found itself below Monster Island, and it traveled to the surface, scaring off the giant monsters there. Several of the monsters fled in the direction of the Florida Keys, which drew the attention of the Hulk, who had at the time made them his home. The Hulk traveled to Monster Island to investigate, but was tackled by the monstrous Chicken Cow. They fell back into the caverns of Monster Isle, and began a several day struggle that moved them a great distance through Subterranea, bringing them into the Savage Land.

Meanwhile, Peter Parker had been sent on a trip to the Savage Land to cover SHIELD (Strategic Hazard Intervention Logistics Directorate)'s efforts to save it. As Spider-Man, Parker joined forces with Ka-Zar and Shanna, but was told by Malthala of the Fall People that they were not needed: Chtylok will save them. The heroes investigated and found that the Roxxon Oil Company, while claiming to have been setting up relay stations, were in fact setting up drills in the Savage Land for all of the oil beneath it (lots o' dinosaurs-> fossils-> fossil fuel-> oil). Roxxon was also using microwaves to hasten the melting, in order to submerge the Savage Land, and thus nullify all laws protecting its resources. SHIELD was apparently unaware of this, and believed they were working with Roxxon to preserve the Savage Land. This melting also freed Stegron, the Dinosaur Man, who had been frozen in the ice. Stegron gathered an army of dinosaurs to slay all of the humans (Spidey, Ka-Zar & Shanna, SHIELD, Roxxon,...and anyone else in site), who he saw as trying to destroy his would-be home.

...Anyway, Chtylok and the Hulk burst out of the ground in the middle of that fight. The Hulk finally got the better of Chtylok and smashed it to the ground, where Stegron's T. Rex's piled on top of it. Ka-Zar revealed the truth to the agents of SHIELD, and they joined forces with Spidey, the Hulk, Ka-Zar & Shanna, and Stegron to destroy Roxxon's microwave/drilling stations. Dr. Gerald Roth, the head of Roxxon's Savage Land drilling plot, was left to his fate by his superiors, and he activated bombs in all of SHIELD's dams, to release the water and flood the Savage Land, killing them all!!!!! However, as Spidey had planned, the water came crashing down from all sides, and formed a whirlpool that sucked it all into the immense subterranean crater carved by the battle between the Hulk and Chtylok.

No true origin is given. It could easily be a Deviant mutate, an extra-terrestrial creature, or it could be the spawn of some race of Gods. You know what? Chicken butt. Sure it's a goofy story...I loved it!! KRAW! Kraw indeed, Chtylok, Kraw indeed.