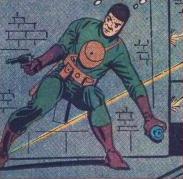 The Cat Burglar is a former second story man who has adapted his act to high rises and taken to robbing fancy apartments. He uses ropes to scale the outside walls of the buildings and carries a flashlight, grappling hook, explosives and a gun in various belt pouches. He thinks he is too small-time to attract the attention of Spider-Man but he makes the mistake of robbing the safe in J. Jonah Jameson's apartment and Jonah offers a thousand dollar reward for his capture.

Spider-Man is attracted by the reward (actually, he's more attracted by the idea of Jonah Jameson having to publicly pay him one thousand dollars) and starts searching for the Cat Burglar, who has gotten so conceited that he is now hoping to dream up a plan to dispose of Spider-Man. In the meantime, he decides to pull one more job before laying low for a while. His plan goes awry and he finds himself pursued by both Spider-Man and the police. The Cat uses every weapon at his disposal to ward off the web-slinger but the police finally catch him when he tries to hide in a chimney. Jonah Jameson is spared the humiliation of having to pay the reward to Spider-Man.

The Cat Burglar returned year later, after stealing the first Prowler's costume. (Hobie Brown had given up being the Prowler after being soundly beaten by Valkyrie. He had dumped his costume and equipment in a storage locker, where it was taken by the burglar.) After being released from prison, the burglar was met by Belladonna, who gave him an apartment, which she paid for. In return, he agreed to do burglaries for her. She ordered him to rob the apartments of several fashion designers and then show up at the home of Desiree Vaughn-Pope. Vaughn-Pope's body guard was with her and mistakenly assumed the new Prowler was Spider-Man. The guard shot at him and went out to the balcony to see if he was dead, but the ensuing fight caused the guard to fall to his death. The burglar knew he was facing murder in the first degree if he got caught and Belladonna used his fear to further her control of him. He was sent after Spider-Man as he patrolled New York and the fight ended up in a factory in the garment district. Prowler managed to poison Spider-Man with belladonna gas and then lead him into a vault. The door closed behind both of them and belladonna gas began to flood the chamber as Belladonna watched from the window. (Spectacular Spider-Man #47)

Spidey managed to break out through the glass window, but found that Belladonna's image was merely a 3D illusion cast from a monitor. Prowler began to shake off the effects of the gas as Spidey spoke with the monitor. Realizing he had a chance to take out the distracted web head, he shot a dart at him, which missed. Spider-Man's spider sense warned him just as the explosive in the monitor blew up, but the glass and fire caught Prowler on his face. Spidey carried the Prowler to safety and left him in police custody as the authorities arrived to the scene of the fire. He was taken to a hospital for his burns and as he feigned unconsciousness, he grabbed the gas gauntlet that the cops had brilliantly left next to his bed. Gassing the one inept guard at his side, he took his police uniform and escaped the hospital, stealing a woman's car in the parking lot. After resting for a few hours, he arrived at Narda Ravana's (Belladonna's) apartment and tried to kill her after stealing $75,000 from her. Spider-Man arrived just as Prowler was about to throw her over her balcony. (Spectacular Spider-Man #48)