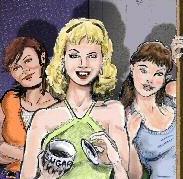 Despite the "Parker luck", Peter has had a number of beautiful women in his life, including this trio. When Peter Parker lived alone in his Chelsea apartment, three distracting ladies named Bambi, Candi, and Randi, moved in across the hall. The friends had dormed together since college at the University of Maryland, and found an apartment in New York after graduating thanks to Candi's aunt and uncle, Mamie and Barney Muggins, the building's landlords. Frequently using the roof to sunbathe, or on one known occasion to paint furniture, they were often an obstacle to Spider-Man's return home through his skylight.

Of the three, Peter got to know Bambi best. Bambi was the most mature of the group, always keeping a watchful eye on her two roomates. A single mom, Bambi was openly flirtatious with Peter, unaware of her neighbor's alter-ego. Her son Jordan lived with his father, and Bambi was never forthcoming with Peter about her motherhood. Perhaps she was afraid it would spoil any chance she had for becoming romantically involved with Peter. Their attraction, however, never amounted to more than holding hands while watching the sunset.

As Spider-Man, Peter once rescued Bambi from a burglar who had the gaul to wear his Santa Claus costume he used from his job at the Macy's department store. While Jordan sat on this Santa's lap, the burglar aquired Bambi's address and information about what he could find in the apartment. Awoken by his spider-sense, Spidey chased the burglar out of the apartment. At the roof, the burglar seemed to have escaped - except it seems the real Santa Claus got the burglar to not only confess and give back his stolen property, but also hand out some of his hand-crafted toys as well!

The ladies were at Peter Parker's moving out party, where Mr. Muggins spiked the punch, and got Pete drunk before facing the Hobgoblin (Jason Macendale).

The last time Bambi, Candi, and Randi were seen was at Pete and MJ's moving out party after they got married and moved to the Bedford Apartments, owned by Jonathan Caesar.