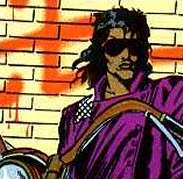 Ace grew up in poverty and raised his brother and sister when his mother became bedridden while leading the gang "The Reapers". Apparently, Ace acquired super-powers and quit the gang. He came into prominence when he witnessed his brother and an accomplice shooting a rival gang member of "The Dragons", local police and Spider-Man sought his critical testimony for conviction.