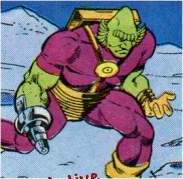 Not a whole lot is known about A'Sai. He is a compulsive gambler, willing to take on almost any wager. He is the friend or associate of another extra- terrestrial named Grunz.

During the events of the first Secret Wars, Galactus' worldship was destroyed. A large charred portion containing a powerful weapon survived and floated aimlessly through space for some period of time. This remnant was discovered by A'Sai who recognized it as an item of power and kept it for himself. A'Sai learned that the device allowed him to cloak himself from virtually all forms of detection, as well to immobilize or obliterate almost any opponent.

Not realizing the full scope of the power of the device, A'Sai took a wager from his friend Grunz, for eight million credit, that he could not capture Uatu, the Watcher observing the activities of Earth. Uatu realized that something was approaching his Citadel, but nonetheless was not prepared when A'Sai blasted into it and imprisoned him in rings of energy. Grunz paid A'Sai for his victory and commented on how he was wasting his vast power on petty fortune. Begining to realize the potential he now had, A'Sai sent Grunz away and attempted to force Uatu to turn over and explain his own equipment and weaponry to him. Uatu refused and warned A'Sai that he could be killed by the safeguards of the equipment if it were improperly used.

A'Sai convinced Uatu to enter into a wager: the winner getting A'Sai's Galactus-weapon or Uatu's technology and the knowledge of how to use it. The fact that Uatu agreed made A'Sai even more aware of the potential power of the weapon. After perusing a number of intergalactic contests, A'Sai chose a football game on Earth: Spider-Man and a group of young kids versus a group of older kids.

Spider-Man had observed the group of young kids taking a beating in the game at the hands of the older ones. When one of the young kids was hurt, Spider- Man volunteered to replace him. In order to "make it fair," the bigger kids set a number of ground rules for Spider-Man, basically preventing him from using his powers, tying one hand behind his back, and making it so they only needed to touch him for him to be down. The Score was 42-0 before Spidey started.

The Watcher agreed to the contest, and despite a rough start, Spider-Man rallied the younger kids and taught them a few plays, and soon the score was again close. Fearing he would lose, A'Sai learned how to operate one of Uatu's machines and channeled power into the leader of the bigger kids, nick- named Truck. Despite this, in the last play, the smallest kid, Gerbil, who had been hurt in an earlier play, summoned his determination and manged to knock Truck into the endzone, scoring the winning touchdown.

A'Sai thought to renege on the bet, kill Uatu, and steal his equipment anyway. However, before he knew it, Uatu had claimed victory, and teleported the Galactus-Weapon into the heart of a star. Uatu had previously vowed not to punish A'Sai for his previous crimes, but he did claim the right to punish him for his intent to renege. A'Sai ended up as an image on a "joker" card at the Bally's Grand Hotel Casino in Las Vegas, where he could see all the gambling, but particpate in none.

It seems pretty clear that the Watcher allowed (to some degree) things to progress as they did in order to gain the Galactus-Weapon, and prevent its abuse.

So what happened to Grunz...

And of course, the Galactus-Weapon may not necessarily have been destroyed in the heart of a sun...